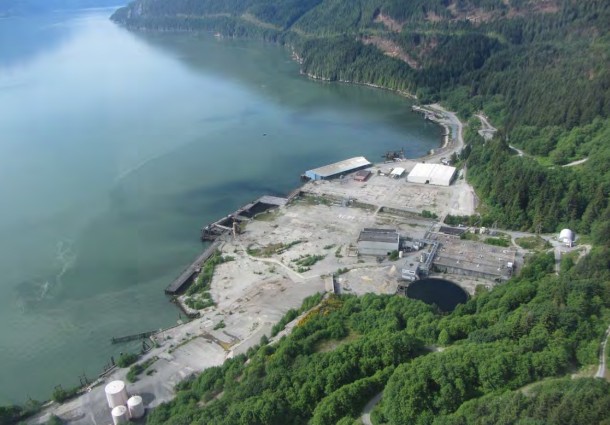 When you’re heading towards Whistler on the Sea to Sky Highway, you’ll notice that amidst the views of the Coastal Mountains and Howe Sound, there is a large industrial facility situated across the water. That 212-acre parcel of land just southwest of Squamish is the Woodfibre site.

The site now known as Woodfibre was first developed more than a century ago, when a small sawmill was built on the property. Over the next few of decades, the property expanded into a pulp plant.

The area, known first as Mill Creek but eventually renamed to Woodfibre, began to grow into a bona fide community. Its location on the west upper side of Howe Sound meant that it could only be accessed by boat. People lived and worked in Woodfibre for several decades. The mill employed over 750 people at its height of operational capacity.

Over the course of its life the Woodfibre pulp mill exchanged hands a few times. Towards the end of the 1950’s, the residential community (then owned by Alaska Pine & Cellulose Limited) was shut down. Community members eventually dispersed into other nearby towns. 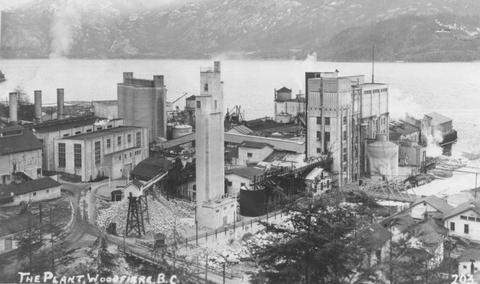 British Columbia-based forestry company Western Forest Products eventually took over the Woodfibre mill in 1980. Western Forest Products brought the mill up to modern standards, and the pulp mill once again began to serve as one of the main economic drivers in the area. The industrial site created jobs in the community and contributed approximately $2 million annually to the municipality in property taxes.

Shifts in the industry in the province—namely high production costs and increased international competition– lead to Western Forest Product’s decision to close the pulp mill in 2006. The facilities on the Woodfibre site were dismantled and sold to a company that planned to rebuild the mill in China.

In early 2013, Western Forest Products announced the tentative sale of the Woodfibre property to a privately owned, Indonesian-based company called RGE Pte. Ltd. The sale is subject to environmental remediation, among other conditions, and is expected to be finalized at the end of 2014.

The property was purchased with intentions to develop a small-scale liquefied natural gas processing and export facility.

LNG is natural gas that has been converted into liquid, which makes it easier to store and transport over long distances.

The LNG industry has been developing at an increasing pace since the early 2000s, when the industry benefited from new technologies that made the production and transportation of LNG more affordable.

Demand for LNG, particularly in Asia, currently exceeds supply, and many countries are making plans to enter the industry, including the United States, Australia, and of course, Canada.

Once the property sale has officially been completed, Woodfibre LNG (owned by RGE Pte. Ltd.) will decide whether or not to proceed with the LNG project. If they do, the plant could be up and running as soon as 2017.

The project has the support of the B.C. Liberals and provincial premiere Christy Clark, who campaigned on the promise of developing BC’s LNG industry.

There are some obstacles in Woodfibre’s future: activists are concerned about the new owner’s environmental track record, while Squamish residents have opinions about the new LNG plant’s impact on their community.

Here is the Link to the Woodfibre LNG site.

Woodfibre LNG’s proactive response—including switching the plant’s energy source to electricity to minimize environmental impact and noise pollution—illustrate that the site’s future as an LNG facility looks promising. We won’t know for sure until 2015 what will happen—but we’ll definitely be following the story!