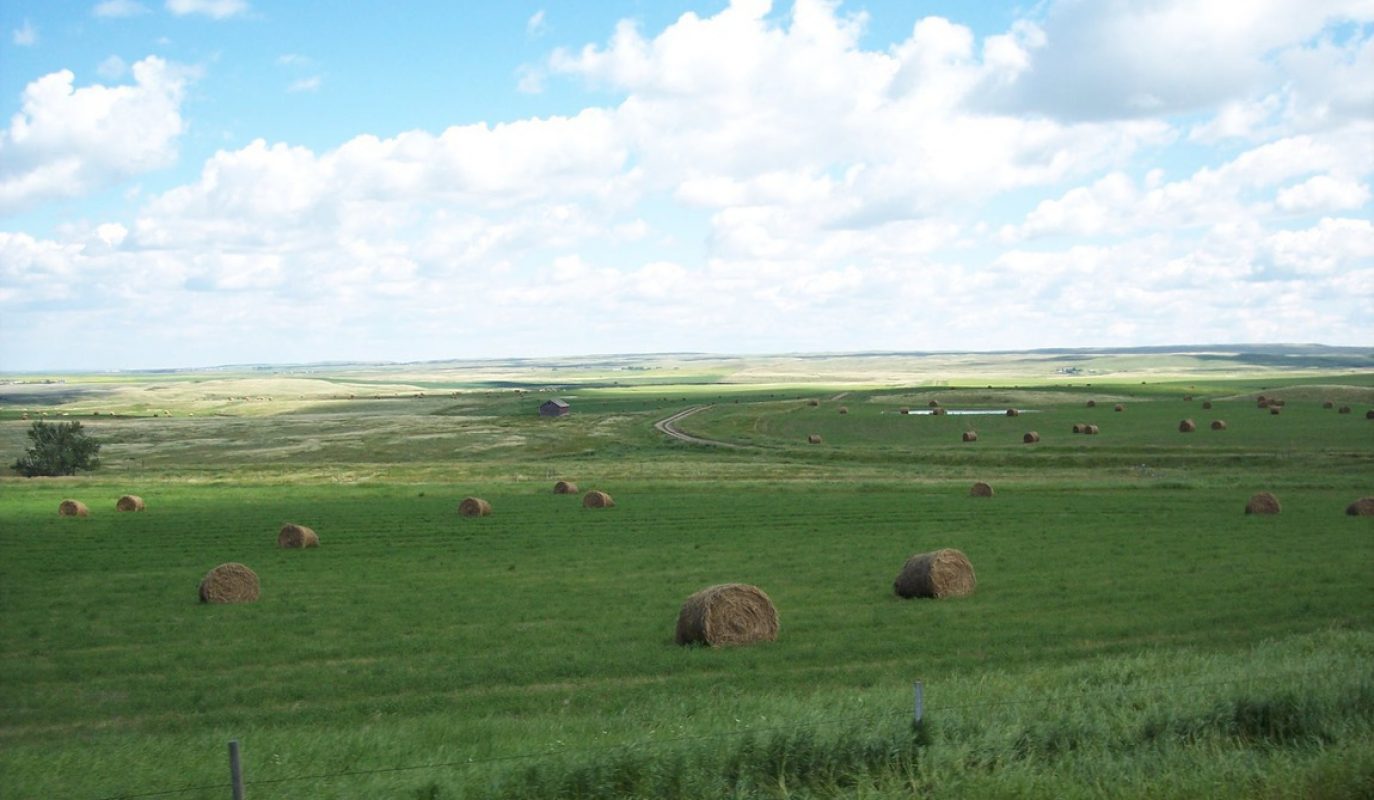 Working cattle operation consisting of approximately 31,194 acres, a carrying capacity of 2,000 cow/calf pairs and a complete inventory of operational equipment. Located about 50 kilometres northeast of Fort St. John in British Columbia's Peace River District, the ranch also received extensive revenue from oil and gas leases. This is one of the larger ranch sales in the province in 2015 with its sale noted by Business in Vancouver

Unique Properties is pleased to announce the sale of Clover Farms, a 31,194-acre cattle ranch in British Columbia's Peace River District. Located northeast of Fort St. John, Clover Farms is currently being managed as a cow/calf operation with a carrying capacity in excess of 2,000 cow/calf pairs. The Farm consists of approximately 100 titles with an estimated 19,000 acres cleared and in production. The balance of the land is lightly timbered and utilized for summer grazing.

Historically, Clover Farms was set up to grow predominantly cereal grains and canola. In more recent years, the farm has been repositioned to operate as a cattle ranch with most of the tillable land now growing forage grass. Given its operating history, the farm still maintains a significant level of equipment and improvements dedicated to grain harvesting and storage with the ability to store up to 250,000 bushels.

The Peace River District has significant oil and gas reserves. Clover Farms receives a valuable revenue stream from a large number of oil and gas well sites that are leased to third party operators. This revenue increases Clover Farms profitability and diversifies its market risk while providing negligible impact on its farming and ranching operations.

Clover Farms is a well run, well maintained operation that has the potential for increased capacity on its approximately 12,000 acres of undeveloped land. With further development it is estimated that this Ranch could carry over 3,000 cow/calf pairs. A strong compliment of equipment and livestock, long running management, and extensive improvements make this an excellent value within the context of Western Canada's agricultural opportunities.

The Peace River Regional District (the 'Peace') is situated in northeastern British Columbia, south of 58 degrees latitude, east of the Rocky Mountains and adjacent to Alberta. Consisting of seven municipalities and four electoral areas, the Peace River District's major cities are Fort St. John and Dawson Creek. Peace River is British Columbia's largest Regional District buy land area, yet has a population of less than 60,000.

Fort St. John, located in the heart of northeast section of British Columbia and situated on the majestic Peace River, is the largest city in the Northeast Region of British Columbia and has a population of 18,600. Ideally located along the Alaska Highway, Fort St. John benefits from a large resource base of oil, natural gas, forestry and agriculture and is often referred to as the â€œenergy capitalâ€ of the Province.

Fort St. John is well connected via both rail, air and highway to the balance of the province, Alberta to the east and Yukon to the north.

The North Peace Regional Airport, located 7 km east of Fort St. John, has daily, scheduled flights to Edmonton, Calgary and Vancouver. Flights from Vancouver are approximately one and a half hours lon

Topographically, the Peace is an interesting region of British Columbia. Lying east of the Rockies, the 'Great Plains' region combines characteristics from both BC and Alberta with a distinct climatic influence that is unique from the rest of the province of British Columbia. The namesake Peace River flows in a west-to-east direction through the middle of the District, creating this area's characteristic fertile farmland. While northern BC has an estimated 50% of the province's Agricultural Land Reserve area, the majority of this land is within the Peace centered around Fort St. John a natural location for a community to locate.

Weather in the Peace area is also interesting with summers that are generally warmer than the balance of the Province west of the Rockies, with a mean annual range of temperature that exceeds 30°C over most of the area and reaching 40°C in the extreme northeast. This is only slightly less than the greatest range observed in Canada. Annual temperatures average just above 0ºC in the Peace River basin and a few degrees lower in the Fort Nelson basin and over higher terrain.

Precipitation over the Great Plains is moderate, averaging only 400 to 500 mm per year. Maximum rates occur during the mid-summer growing season, another continental feature of the climate of the area. Solar radiation is plentiful. Fort St. John has an annual average of over 2000 hours of bright sunshine, closely rivaling Victoria as the sunniest location in British Columbia. This sunshine is greatly beneficial considering the shorter growing season relative to southern British Columbia.

Approximately 19,000 acres of the farm are cleared and available for production. Of this area, 17,500 acres is fenced and cross-fenced into paddocks of between 150 and 300 acres. At any given time about 8,000 acres are in production, the majority of which are used for forage grasses. The balance of the property, an estimated 12,500 acres, is lightly timbered and is used for summer grazing. With the exception of an estimated 2,000 to 3,000 acres, which will require draining, this land has the potential for further development of productive farmland. Although no timber cruise has been conducted, the predominant Aspen inventory has value as wood fibre for pulp and paper. This provides additional value to a ranch owner as the land is developed.

The Farm is currently operated as a cow/calf operation with an expected inventory post calving of about 3,500 head of Red Angus/Simmental cross. The carrying capacity of the ranch is estimated to be a minimum of 2,000 cow/calf pairs. As the ranch has been transitioning from a grain operation to a pure cattle operation, it is still purchasing a small amount of winter-feed. Winter buying will be unnecessary in the next year or two as the farm is fully transitioned. Given the growing season and the climate, the ranch does not need to irrigate and therefore has no water licenses. Crop yields for forage grasses are about 1.5 to 3.0 tonnes per acre.

The ranch does one cut with a growing season that starts at the end of May and finishes at the end of August. In British Columbia, many ranches have grazing licenses, permitting them to graze their cattle on Crown land. The licensing process is administrated by the province's Ministry of Forests. Licenses are typically valid for a period of 10 years and can be either exclusive or shared. A grazing license provides ranchers with a certain number of Animal Unit Months (AUM), which is the amount of forage required for one month by an average animal (or cow/calf unit) aged 6 months or older.

Grazing licenses provide ranchers with the ability to summer graze cattle (usually from May to September, depending on the range), freeing their own fields to produce hay and field crops. Cattle are then winter-fed using the hay and crops grown during the summer months on their own cultivated land. Grazing licenses are needed throughout much of British Columbia, as there is limited land available for crop production in the fertile and rich river valleys, but significant land available for summer grazing and a grazing season that easily extends for 6 months. While grazing land is available under Ministry of Forest tenures in the Peace region, there is also a significant amount of land that is available for the growing of forage for livestock that might otherwise not be as suited towards higher value crops. As such, a farm like Clover Farms can carry a significant level of cattle without the need for grazing land.

The ranch was historically operated as a pure grain operation with Oats, Barley and Canola. While this area has a significant number of farms dedicated to grain production, Clover Farms' predominantly Class 4 soils makes it is easier to manage as a cattle ranch. Historical yields were a maximum of 25-30 bushels for canola, 100 bushels for oats, and 70-80 bushels for barley. The ranch still has the equipment and improvements for grain harvesting and storage with the capacity to store 250,000 bushels.

Clover Farms has predominantly Class 4 soils. A full description of the Soil Classifications is available electronically.

Clover Farms has a significant level of improvements that includes five residences, five mobile homes and a wide range of farm related buildings. The estimated replacement cost is in excess of $3,000,000. A full list is available to qualified purchasers.

Given the farms historical use, the equipment inventory is extensive. All equipment is owned outright by Clover Farms with no leased equipment.

Clover Farms currently receives in excess of $200,000 per year in lease revenue from oil and gas well sites. Further details on these leases are available to qualified purchasers.

The majority of the lands associated with this offering are located within a land designation known as the Agricultural Land Reserve, or ALR. Created in 1973, the Provincial Agricultural Land Commission (ALC) is an independent Provincial agency responsible for administering the Agricultural Land Reserve (ALR), which is a land use designation, intended to encourage agricultural use. The purpose of the ALC is to preserve agricultural land and encourage farm uses in collaboration with local landowners, local governments and the First Nations. ALR boundaries were set in the early 1970's and determined based upon the capability and suitability of land for agricultural use, uses at the time, local zoning and public input. Approximately 5% of BC's land base, the most agriculturally important, is located within the ALR.

The ALR covers approximately 4.7 million hectares of land within British Columbia, including both private and public lands and takes precedence over other land uses; as such, local and regional government bylaws are planned in accordance with this provincial policy.

Generally, land within the ALR is intended only for agricultural purposes. However, recreational and agri-tourism related businesses might be permitted on a conditional basis.