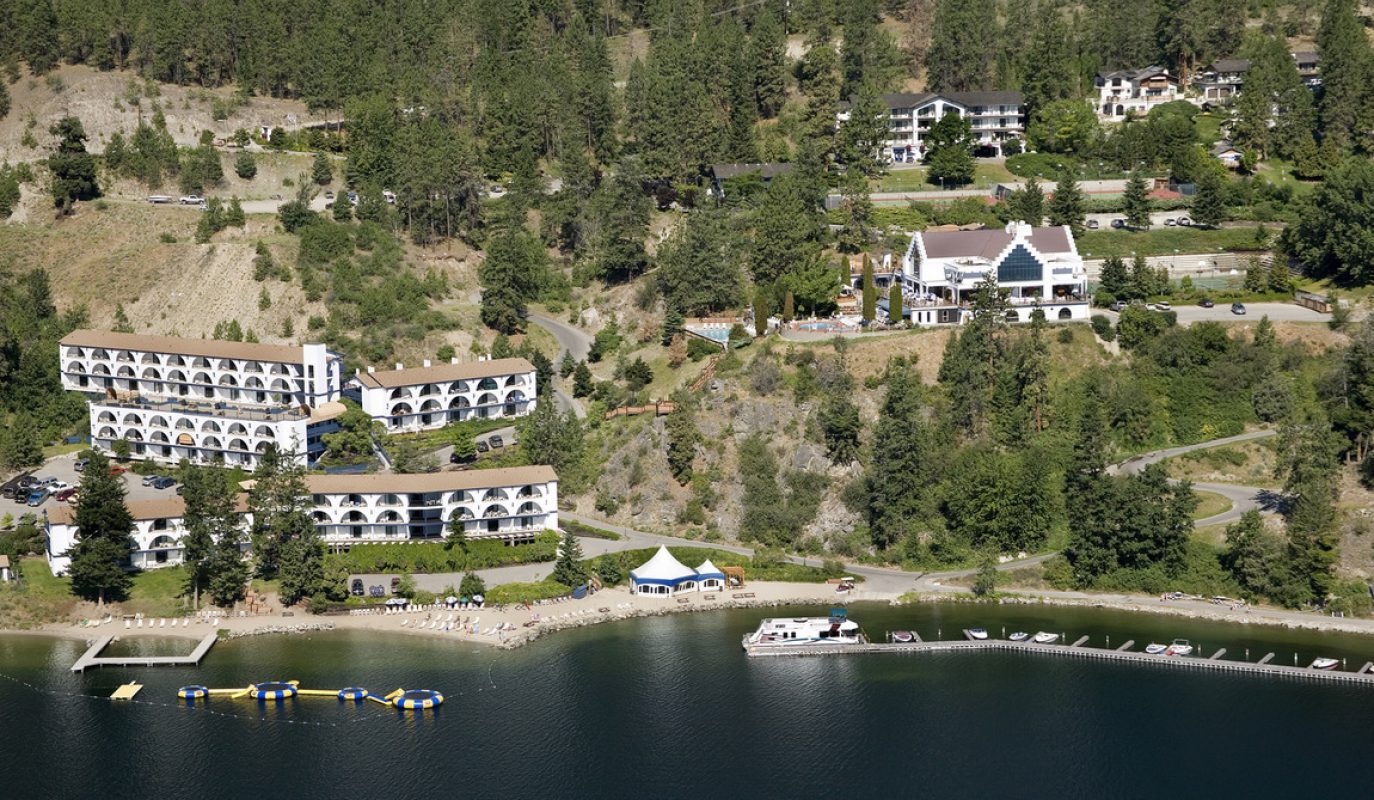 The Unique Properties Group is pleased to announce the sale of Lake Okanagan Resort. The resort is located 20 minutes north of the community of Westbank on Lake Okanagan's quiet north arm. Offering a wide range of amenities, this waterfront Resort included a marina, golf course, accommodation, restaurant facilities, and a spa. The sale of the resort was fairly public and garnered the attention of Global News.

The Unique Properties Group is pleased to announce the sale of Lake Okanagan Resort. Located on almost 5,000 feet of waterfront, the Resort lies 20 minutes north of the communities of Westbank and Kelowna on Lake Okanagan's quiet north arm. Offering a wide range of amenities, the Resort includes a marina, golf course, accommodation, food and beverage facilities, a spa, and, the Okanagan's only beach licensed for liquor consumption.

Lake Okanagan Resort was originally developed in the late 1970's and early 1980's. One of the first of its kind in the region, the Resort remains a popular destination given its wide range of amenities, quiet location and range of accommodation types.

During the last five years, the Resort has received a significant level of needed capital improvements, which included upgrades to its infrastructure, new marina facilities with breakwater, concession and gas dock, renovations to its Food and Beverage operations, and the construction of two new buildings with 48 condominium units.

Although continued updates to this facility are considered prudent to maintain its customer base, the Resort offering is an excellent opportunity for a purchaser to capitalize on the recent improvements and to realize immediate cash flow with the returning strength of the Okanagan real estate market.

The Resort consists of 217 units of accommodation, which include a mix of motel style units, larger condominium units and chalets. Of these 217 units, 64 units are timeshare and 77 are privately owned. This offering specifically includes the remaining 76 units and, the majority of the Resort amenities and operations as follows:

This offering also includes the management contract for the resort, details of which are available to qualified purchasers.

The Central Okanagan Regional District, situated along the shores of Okanagan Lake in the southern interior of British Columbia, incorporates approximately 2,904 square kilometers of diverse landscapes and topography, including nearly 7,300 acres of beautiful sandy beaches. The landscape is abundant with agricultural land, forested hillsides and mountain peaks. The region has a total population of 179,830 (2011), which is largely concentrated in the City of Kelowna. Other notable communities include West Kelowna, Lake Country and Peachland. Kelowna ranks as the 22nd largest metropolitan area in Canada.

The Central Okanagan climate is mainly semi-arid with its notorious dry, sunny summers boasting daytime temperatures often in excess of 35 Â°C, making this region a very popular tourist destination for local, national and international travellers alike. The winters are cold and can often be cloudy when arctic air masses occasionally penetrate the valley that is the Central Okanagan.

What began as a seasonal tourism destination built focused on its beaches and ski resorts has progressed to a travel destination in all seasons. Both golf and wine have become significant drivers with 19 golf courses and more than 25 wineries in the Kelowna area alone. The Kelowna area also features over 45 hotels, motels and resorts, and over 100 bed and breakfasts along with many nearby campsites.

Lake Okanagan Resort is situated on approximately 74 acres of waterfront land on Lake Okanagan's north arm. Accessible by Westside Road, the Resort has 217 units of accommodation, in addition to a wide range of amenities.

Originally developed in the late 1970's and early 1980's, and with continued expansion since that time, the resort features a mixture of architecture and styles, and a range in the quality and size of accommodation units.

The Resort was previously owned and operated by Fairmont Resorts, which entered CCAA protection in 2009. The Resort was subsequently acquired by Northwynd Properties, and has been operated by this group since that time.

Built in 1979, this two-storey building is located at the north end of the resort and consists of 5,712 square feet of floor area in 12 motel style units. Each unit is equipped with two queen beds, a kitchenette and dining area. All 12 units are currently being used in the hotel rental program. The Kokanee Inn units are stratified and could be individually sold.

These buildings each have six units. Three of the units are privately owned while the remaining 15 units are owned as timeshares and are within the rental pool. This offering does not include any units from these three buildings.

These two lakefront-oriented buildings also date back to the original resort development and were constructed in 1980. Although these two buildings exhibit some functional and physical depreciation, their waterfront location provide for high summer occupancy. Combined these two buildings have 36 units; all of them configured as one bedrooms with two queen beds. Three of the 36 units are included within this offering, 23 are timeshare owned, and the remaining 10 are privately owned. Currently 29 of the 36 are in the hotel rental pool.

The Terrace 3 and 4 buildings are situated just above the Lakeside buildings and are of a similar age. Combined, these two buildings have 48 units, which are all one bedrooms with queen beds. Of the 48 units, 8 are included with this offering, 26 are timeshare owned, and 29 are privately owned. Forty units are within the hotel rental pool.

These two buildings were recently constructed in 2007 and 2008 and contain 24 units in each building. Each building has 54 surface parking stalls. Building 1000 has twelve 3-bedroom, 3 bath units of 1,341 square feet, and twelve 1-bedroom, 1-bath units of 715 square feet. Some of the units within this building will require minor finishing and require complete furnishing. All 24 units are available as part of this offering and are part of the rental pool.

Lake Okanagan Resort includes a 9-hole executive style golf course. Course play is included with any nightly room rental, and is open for play to condo owners for green fees. Due to the location and nature of the operation, the course receives approximately 400 paid rounds per year (i.e. non hotel guest rounds). The course provides for 1,098 yards of play.

The Resort features five food and beverage facilities, which includes two main restaurants within the clubhouse, an outdoor snack bar adjacent to the main clubhouse at the pool level, the beach cantina, and the resort's catering functions. Built in 1985, the Clubhouse contains almost 27,000 square feet of floor space over 3 floors, with 10,500 square feet for its banquet and restaurant area on its main level, and 8,730 square feet for its restaurant on the lower level. The Clubhouse can accommodate 345 seats inside and 200 seats of outdoor dining space. Facilities within the clubhouse include a spa (rented to a third party operator), fitness facility, pool and hot tub, and tennis courts.

The Staff housing includes two 3-bedroom units, and six 1-bedroom units. These units are located away from the main resort area, just before the resort entrance.

The new marina was constructed in 2012 with a large breakwater and new gas dock. The marina currently provides for 36 slips and is approved for expansion to 158. Moorage is available to guests and visitors and is a â€˜cost plus service' not included with accommodation. The marina is an integral and valuable component of the resort as Lake Okanagan has limited moorage with waitlists common at all marinas. Full expansion of this marina will provide for additional cash flow through daily, weekly or monthly moorage, or through the sale of long term leases on individual slips. Several long-term slip leases have been sold to private owners. Full details are available to qualified purchasers. The water lot lease for the marina is for 30 years and is effective until June 2041, at which point it will need to be renewed.

The waterpark is set up for summer use with trampolines. A swimming dock fronts this part of the beach. The sandy beach is very popular with guests and is licensed for alcohol consumption.

Located across the Road from the main property is a single title of 197 acres. This property is within the Agricultural Land Reserve. With the exception of some servicing placement that benefits the main resort (10,000 gallon water reservoir), this property is undeveloped and could be sold off or used for limited agricultural operations.

Several tennis courts are included on the property.

This 15-acre parcel of land is located within the Resort boundaries and features extensive waterfront and frontage on the golf course. The Land Use Contract provides for a remaining site density of 283 units. This site should be able to accommodate the remaining permitted density. For a complete outline of allowable density please refer to the Land Use Contract in Appendix A.

This offering provides a purchaser the opportunity to acquire the aforementioned assets and to become the new operator of the Resort. With the exception of the spa, which is leased to a private operator, all the amenities are managed and maintained by the resort operator.

Under the management agreement (strata bylaws?) the Resort is only required to operate the golf course and pools. Historically the resort has operated the restaurants on an annual basis. This year all restaurant facilities were closed from January 1st to April 1st due to limited demand.

At present, the hotel has 124 units to use within the rental pool.

The Resort is subject to a Land use Contract (LUC). Land Use Contracts were in use in British Columbia in the early to mid 1970's but are no longer utilized in the Province. They are contractual agreements between property owners and a municipality that regulate land use on a specified area of land. These contracts are quite detailed with respect to the amount and type of density that can be constructed. Based on our discussions with the Regional District their preference would be to eliminate the Land Use Contract and apply traditional zoning bylaws. The Regional District has limited control over the Resort's land use and is not able to collect Development Cost Charges. Conversely, development of the resort is dictated by the specifics of the Contract.
The LUC allows a total build out density for the resort of 500 units. Given the 217 units that have already been constructed, the remaining density is estimated to be 283 units. Complete details of the allowable units are outlined in the LUC, a full copy of which is available electronically.