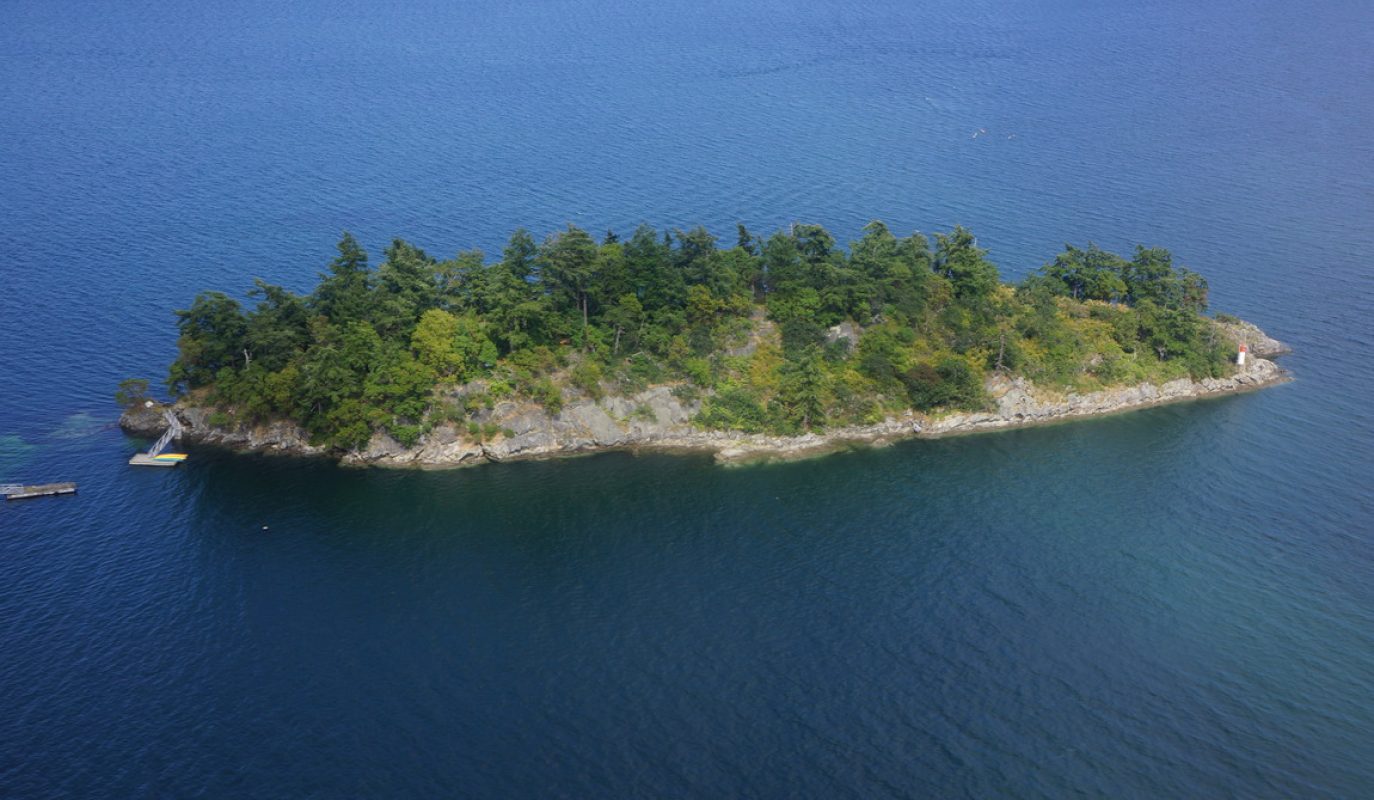 Consisting of approximately 3 acres, Second Sister Island is improved with a dock and was a great opportunity for a buyer to create their own private island oasis in the breathtaking Gulf Islands.

Predominantly treed, the island remains largely in its natural state. Improved with an excellent dock, the island offers a purchaser the opportunity and flexibility to construct a new home to their own specifications.

Second Sister's location places it within 4 kilometres of Ganges Harbour on Salt Spring Island. As with many of the Gulf Islands, Second Sister is also easily accessible from Vancouver Island and the Mainland by boat or float plane.

Situated at the entrance to Ganges Harbour, Second Sister Island is a largely unimproved island of approximately 3 acres. Attached at high tide to a neighbouring islet, Second Sister enjoys incredible views and is fairly well protected from the prevailing southeasterly winter winds. Its close proximity to Ganges makes this island particularly attractive for many reasons.

Second Sister Island is approximately 240 metres long and 90 metres wide and has a moderate topography.

At three acres in size, Second Sister Island offers several excellent building sites for a new residence. The island has no services, however off grid systems for power generation are sophisticated and simple to use. Considering the layout and orientation of the island, a combination of wind and solar power systems will likely function best for winter and summer use. Fresh water can be provided via rainwater collection systems while sanitary services can be accommodated by an in ground septic system.

The northern end of the island allows excellent access to a pretty clamshell beach. A newer, 30' x 12' all-weather dock (with sturdy aluminum ramp) accommodates deep keel vessels and provides excellent access to and from the island. A steep trail levels out to the upper plateau of the island where there are several excellent building sites offering level topography and superior views of the entrance to Ganges Harbour and the varied array of vessels passing by. The shoreline and water frontage of the island tends to be rocky and steep providing for outstanding security and a wonderful sense of privacy. An easement on the south end of the island accommodates the navigational light that marks the entrance to Ganges Harbour. There are no other improvements on the island making this a blank canvas for your dream retreat

The Gulf Islands are situated along the southeast coast of Vancouver Island, separated from the British Columbia mainland by the Strait of Georgia. Comprised of over a dozen large islands and many smaller islands in various stages of development, the Gulf Islands are blessed with an abundance of sunshine and a diverse ecosystem. The area is in close proximity to Vancouver, Victoria, and Seattle and is easily accessible via ferry, private boat, or float plane.

The Gulf Islands were originally home to the Coast Salish, and were settled by the European explorers in the 18th Century. The name Gulf Islands originated from the "Gulf of Georgia", a term erroneously used by Captain George Vancouver in his early mapping of the southern part of the archipelago. Each island has a specific and unique history.

The Southern Gulf Islands are made up of seven major islands hat have ferry access, as well as numerous less populated islands. In all, The Gulf Islands are home to approximately 14,000 residents. The largest island of the seven is Salt Spring Island which has a population of approximately 9,600. This number increases dramatically in the summer, as vacationers retreat to benefit from the warm climate and sunshine that the area enjoys. In fact, the Gulf Islands boast a cool Mediterranean microclimate - being the mildest climate in Canada, with just 840 millimeters (33 inches) of rain annually and average summer temperatures of approximately 20.5 degrees Celsius (69° F).

The rural nature and natural setting of the Gulf Islands provides for an abundance of recreational opportunities. The area features clean swimming beaches, picnic grounds, and tremendous opportunities for kayaking, hiking and salmon fishing. The area provides for excellent boating as the seas rarely become too large, and the next anchorage is always just around the corner. The Gulf Islands also produce an abundance of high quality, local organic goods. The economy of the Gulf Islands is service-oriented and is heavily reliant on the tourist industry. This includes a variety of rental properties that help accommodate the large influx of seasonal tourists. The area also has a long history and is well known for its agriculture. Most recently, several vineyards and estate wineries have been established to take advantage of the area's Mediterranean climate. Small businesses are also a vital part of the local communities, with many artists living in the Gulf Islands, as well as various entrepreneurs and web-based businesses.

Salt Spring Island (also known as Saltspring Island) is the largest, most populous, and the most frequently visited of the Gulf Islands. The island was originally settled by pioneers in 1859, when it was officially known as 'Admiral Island'. The island was retitled to its current name in 1910. Salt Spring Island has a long and interesting history, having been settled by various groups including African Americans and Hawaiians. The Island's main commercial centre is Ganges, a vibrant and busy waterfront village with a unique and charming atmosphere that showcases artists, fresh island produce, and a significant level of services not found on the other Gulf Islands.