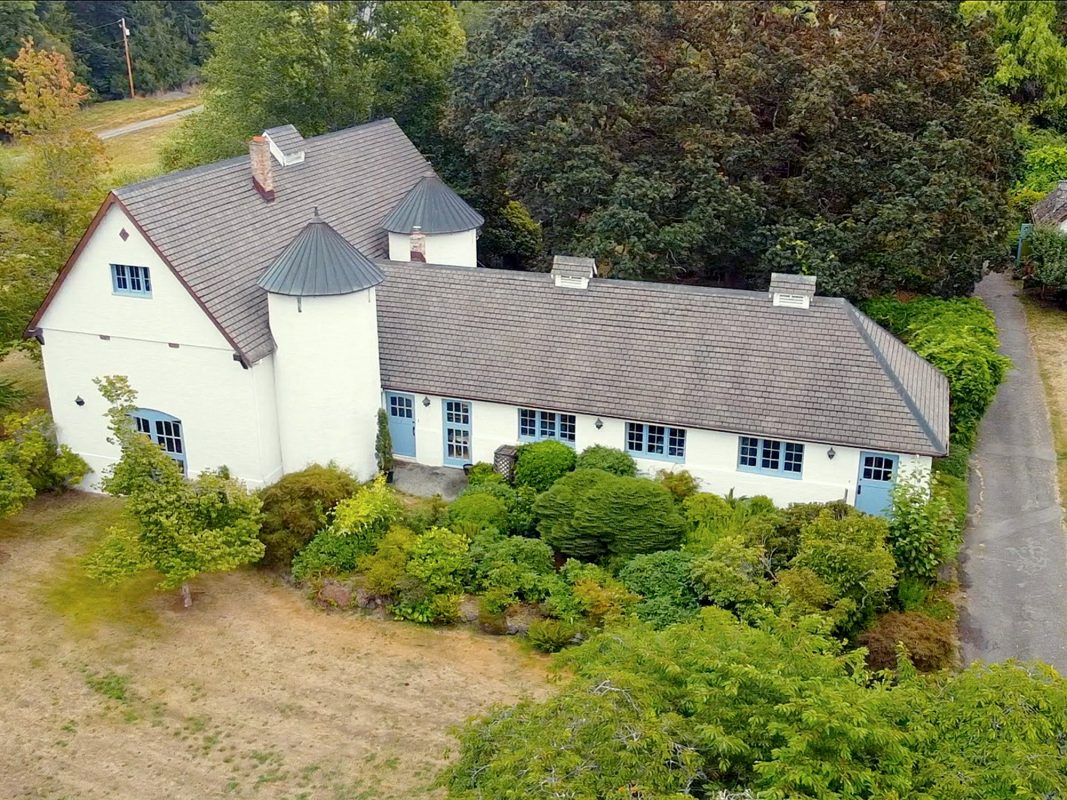 La Ferme des Reves, (The Farm of Dreams), truly expresses the character of this remarkably beautiful 3.2 acre heritage property and home - an oasis of calm and beauty that exquisitely shelters a family and provides sufficient land for the addition of one or two additional family dwellings.

The home was once a dairy barn, which was part of a much larger farm, and was converted to a home about 40 years ago. The building is reminiscent of a French farmhouse, with a unique and beautiful sense of style.

The 3800 SF home has four distinct living areas: The west wing, including Library, Dining Room and Kitchen, the central area, of Living Room and Study, the south bedroom wing, with three bedrooms and four-piece bathroom, and the upper 800 SF Master Bedroom and Ensuite, created within the original hayloft, with its 20 foot ceilings.

A stewardship of love and care has been dedicated to the whole property, which also includes a guest cottage, a 3000 SF barn/theatre, and a cutting garden, laid out in the French country style.

This very unique legacy property could be a multi-generational compound or a private oasis for years to come.

La Ferme des Reves is located in the heart of Vancouver Island’s Cowichan Valley This is an area known for its warm summers and temperate winters. In fact, the climatic zone of Cowichan Valley is classified as the Mediterranean. It has the warmest average temperature of any area in Canada with no weeks of below zero, no wind chill, and very little snow. This is an area that is quickly becoming a destination for food tourism, wineries, and recreation, with its increasing selection of wineries (Napa North), farm-to-table produce, and skilled culinary artisans.

Maple Bay has several marinas and the Maple Bay Yacht Club, which accommodate both sail and motorboats, both locally owned and internationally owned.

The main residence is a conversion of a 100-year-old dairy barn, originally built as part of a much larger farm, which was ultimately subdivided. The nearby Quamichan Inn, (destroyed by fire a few years ago), was the Farm's Manor House. When it was built, the dairy barn was considered to demonstrate the most modern ideas for raising dairy cows.

The dairy barn was converted to a house about 40 years ago and has been home to several families, including actress Meg Tilly and her husband. It is now occupied by the man who, as a child, was the model for the little prince in St Exupery's well-know book 'le Petit Prince'.

Features of the home include:

● New millwork in the library.

● New millwork, farmhouse sink, counters and refrigerator in the kitchen,

● Replaced the old brick chimney in the entry hall with a new, larger one, clad in

● Added bead-board paneling, baseboards, and apron and stool cap to the entry

hall and the adjacent guest bathroom.

● Removed a mezzanine in the main bedroom, (one of the former haylofts), to fully

express the 20ft ceiling height and thus the beauty of the space.

millwork for the ensuite bathroom vanity and linen storage.

● Almost every room in the house has been repainted with fresh, more harmonious

● Lighting throughout the house has been replaced with high-quality fixtures.

● Window and door flashings and seals have been replaced.

insulation, in both the ceiling and the wall cavities.

● Insulation above the living room has been maximized, with blown insulation, and the

wall cavities of both silos have been fully insulated.

● A new main electrical panel has been installed.

● New decorative fencing has been installed around the flower-vegetable garden,

including several panels of wattling, in the French style. Several gates have been

redesigned and replaced with decorative elements.

● Several trees in the heritage orchard have been replaced, maintaining the same

● The flower-vegetable garden has been considerably enlarged, with raised beds laid

out in the French style, with a central circular bed containing a columnar evergreen,

which contains more than one bird's nest every spring.

● The fruit-bearing plants in the garden have been increased with two mature fig trees,

many roses, raspberries, tayberries, blackberries, mulberries, and black currants as

well as many perennials of other types, including poppies, irises, tulips, …

Set amid the cutting and potager garden, is the most charming guest cottage, containing a bedroom, a sitting room, a modest kitchenette, and a three-piece bathroom. The door from the cottage bedroom opens directly into the garden and a small terrace suitable for breakfast or an afternoon with a good book.

The historic barn is over 100 ft in length and was originally used to shelter horses and pigs and provide storage for the larger farm. A hen house completed the agricultural facilities.

Today, the barn provides storage for drying firewood and all manner of farm equipment: mowers, trimmers, log splitters, wheelbarrows, garden tools, and so on. It also accommodates a five-tiered-40-seat theatre with a small stage, which is ideal for small musical performances or for movie nights in the summer. Several enclosed storage rooms provide space for workshops and the storage of tools and sports equipment.

Located between the Barn and “Le Petit Lac”, the Summer Kitchen offers a perfect spot for summer dinners or an afternoon of sketching the beautiful pond and willow tree nearby. The picturesque gazebo is embraced by a tree hydrangea on its roof and climbing roses on two sides that have been carefully pruned to maximize their growth.

The Gardens surrounding the Summer Kitchen have been created and planted with perennials intended to provide for year-round enjoyment.

The property has a brook running across it, with two ponds at intervals, that support many small wild creatures, such as Mallard ducks, Wood ducks, and a statuesque Great Blue Heron that frequently visits. The brook feeds Le Petit Lac, shared with Low Fell Farm to the east. A small dock with permanently affixed lawn chairs allows for an easy opportunity to sit on a summer's evening and watch the blue dragon-flies circle.

The property supports several tall, old Garry Oaks, including one that we believe to be the largest on the Island. It is referred to as King Oak.

Over four seasons, the farm is home to at least 56 varieties of birds, including raptors, songbirds, ducks, quail, hummingbirds and many other visitors

The farm lends itself to gracious entertaining.... Whether its Christmas concerts in the main home or events in the Theater/ barn, or hosting long-table dinners in the courtyard in the summer. Smaller dinners or relaxation can also be enjoyed in the outdoor kitchen and dining Pavillion.

The main public areas of the house exude celebration. The rooms flow from one to the next in a manner that invites people to circulate, with a glass of wine, from one conversation to the next, without feeling too crowded. Stepping into the home seems to transport you to rural France.

The farm and the Cowichan Valley offer security and quality of life. The property is completely fenced. With the ability to grow food - fruit, and vegetables of all kinds and to have direct Farm to Table access to artisanal farm products delivered directly to the door, along with bread, baking, pasta, and meats. This area truly is the land of "milk and honey"!

The garden has been maintained with the help of a Certified Horticulturist who is completely familiar with the gardens and landscape elements.

In addition, a skilled located tradesperson is regularly retained for projects and maintenance at the farm.